Siglo My Cigar Case $120.00
Back to products
Next product

The light flavour of its blend makes it an attractive option for those who like a lighter Habano that is delicate and aromatic, as well as exceedingly elegant and complex.

Hoyo de Monterrey is modernizing with a new heavy ring gauge vitola for a historic line that is reinventing itself and expanding: Serie Le Hoyo.

This new vitola’s blend only uses Seco anLigero leaves from San Juan y Martínez, the historic Cuban Denomination of Origin where the brand was born in 1865

The light flavor of its blend makes it an attractive option for those who like a lighter Habano that is delicate and aromatic, as well as exceedingly elegant and complex.

The Hoyo de Monterrey plantation is one of the Vegas de Primera – first class fields–  where it’s soil and micro-climate lend to Hoyo de Monterrey flavour. The flavour of Hoyo de Monterrey’s blend make it an attractive choice for those who seek a delicate yet aromatic Habano that is lighter to the taste but with great elegance and complexity. Made using the Tripa Larga, Totalmente a Mano – long filler, totally hand made –  technique, using filler and binder leaves from the Vuelta Abajo tobacco zone.

“Enrobed in an attractive cover leaf, this thick cigar burns evenly, delivering big impressions of rich wood, pistachio nut and espresso crema. There is a pleasing hint of white wine on the finish.” 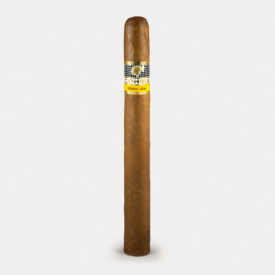